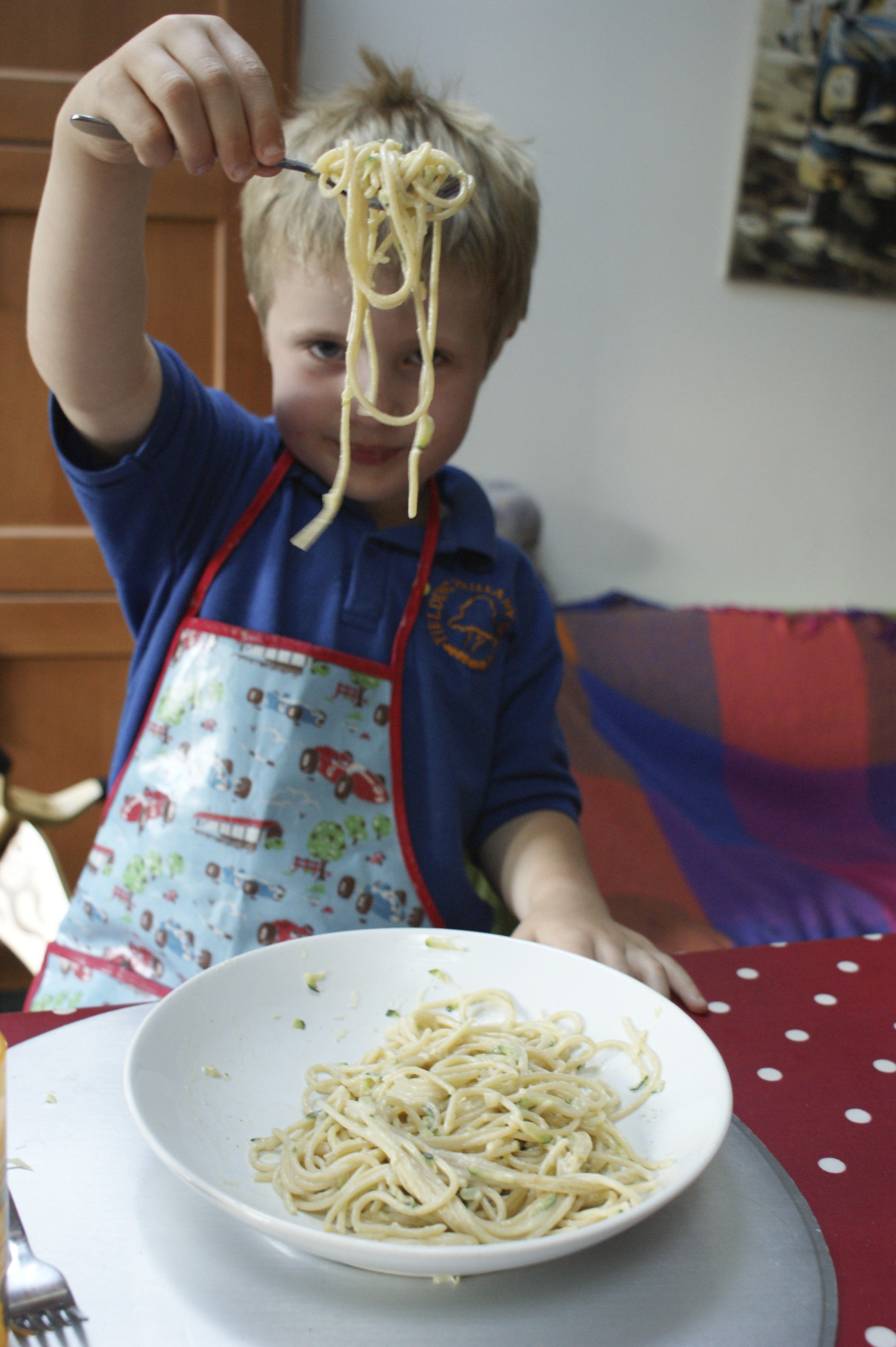 I’m a massive fan of menu planning for so many reasons.

It prevents me from spending too much on the weekly shop because you only buy what you need – especially if you do an online shop and don’t get distracted by the offers at the end of the aisles!

When you’re up to your armpits in small children having a list of what you’re going to eat for every meal is really comforting. There’s no need to stress about what’s for dinner – just look at the list and as if by magic you’ve got all the ingredients already!

You don’t need to waste any food because it’s all accounted for.

You’ll find you eat more interesting meals because you spend some time thinking about what you’re going to have across the week. It gives you the chance to balance the meals and try something new, instead of reverting to the same-old same-old that bores everyone to tears.

It might not suit everyone to be so controlled about it, some people might like to see how they feel on the day before they decide what they want to eat. When I change my mind about  one of the meals I’ll either swap the days around or if we’ve resorted to takeaway then that night’s meal ingredients will get put in the freezer for another day. 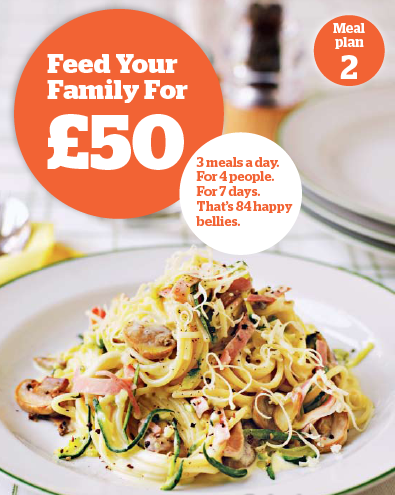 I was invited along to the launch of Sainsbury’s Feed Your Family for £50 event.

Seven days worth of food for £50 (that’s three meals a day) sounds like a tall order, but they’ve spent a long time working with top nutritionists to get the right balance of food, along with the timing of special offers to get more for your money.

The bloggers who attended were all lucky enough to receive the entire £50 worth of groceries delivered to our doors so we could try the second meal plan for ourselves exclusively before its launch date on 25th May.

It’s a bit of a leap opting for a meal plan designed by someone else – but I was willing to give it a try. You never know what the boys are suddenly going to enjoy eating as they can be so changeable, so it’s a good opportunity to try new stuff out on them.

I could not get over just how much food arrived – a lot of it was from Sainsbury’s Basics range – but as I totally embrace bargain food that didn’t bother me at all. In fact it was great to discover even more Basics items that i’d not spotted before like the Part-Baked Baguettes,  peanut butter and cream cheese.

The Basics Muesli was really dusty though and made for a pretty uninspiring breakfast.

The lunches weren’t overly great either – a whole lot of sandwiches which I find dull and I couldn’t bring myself to try tinned mackerel to go in a salad – that’s old lady food that was given promptly to the dog!

Things were looking up at dinnertime

The dinners however were pretty darned good. The portions were huge – so we found ourselves feasting on the leftovers for lunch instead of the insipid sardines. 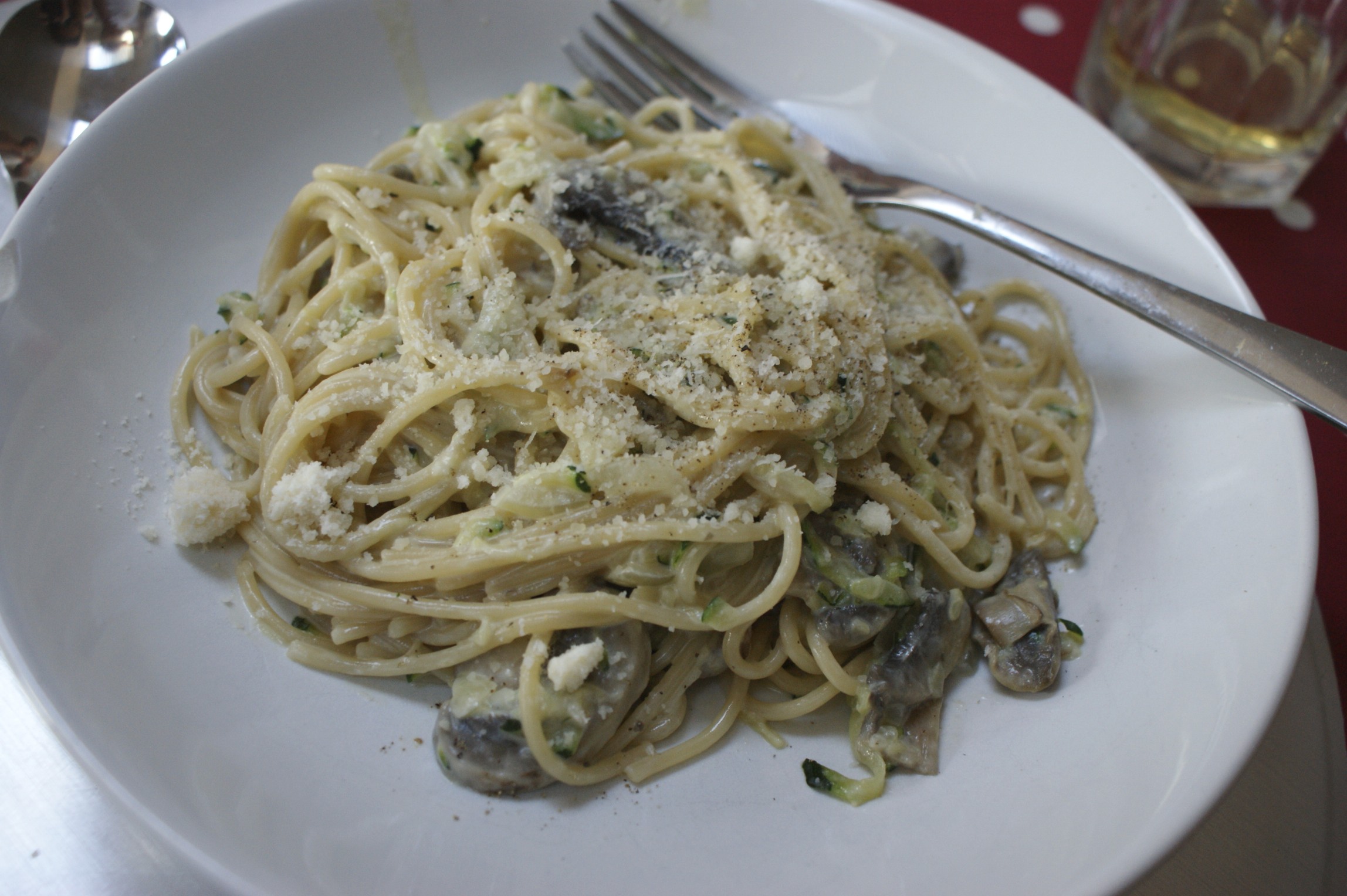 The Carbonara Spaghetti went down really well with the boys – none of them usually eat courgettes, but they were grated into this dish and promptly vacuumed down without protest. I left the ham out to make it a vegetarian meal.

It was a super creamy comforting dish and I’ll definitely be making it again. 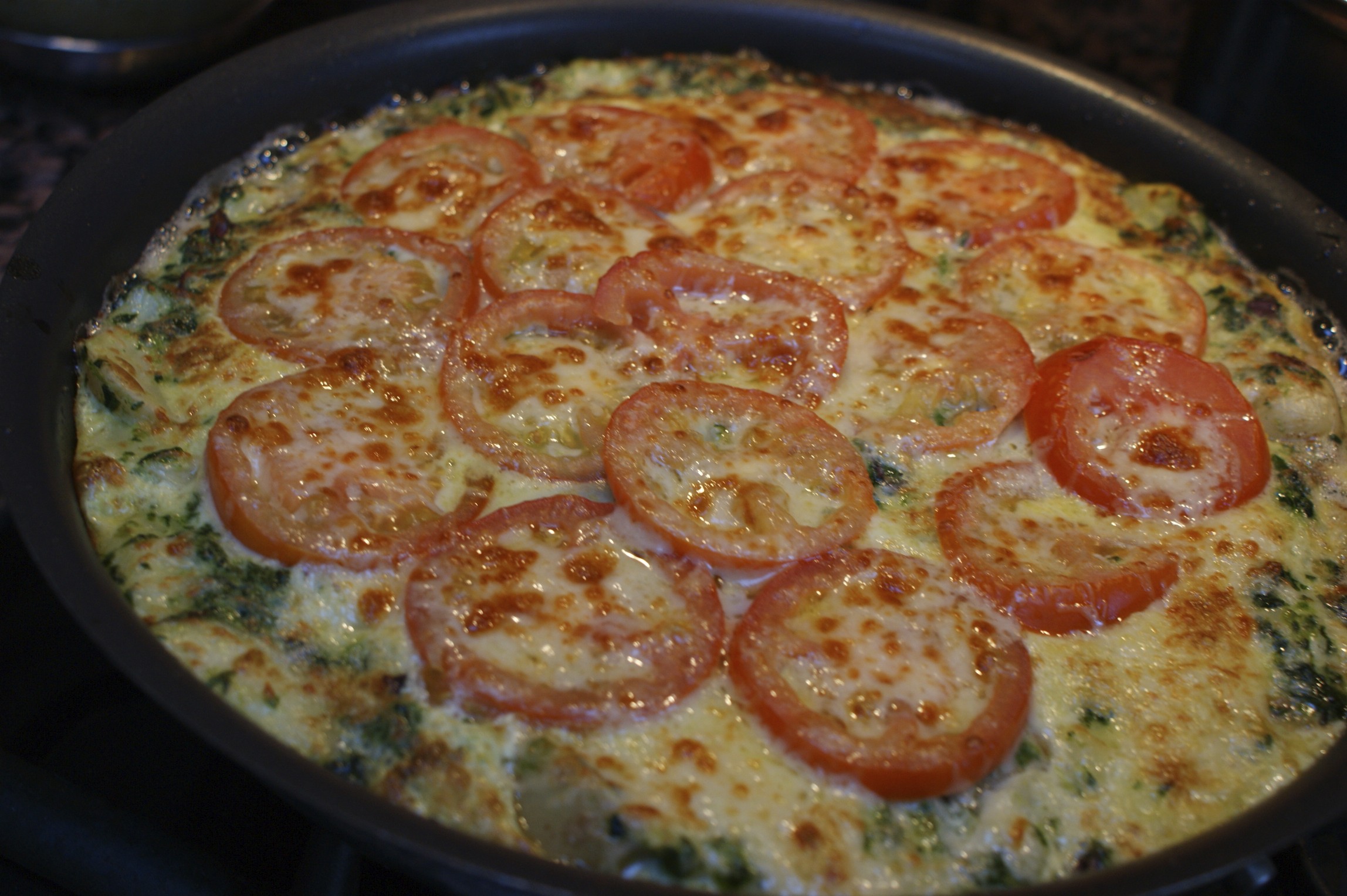 The sausage, tomato and cannelloni pot was pretty good on Tuesday, and Wednesday’s Frittata was a real hero.

There was masses of it, and it was even more delicious the next day for lunch. A great vegetarian option – although serving it with a side of boiled broccoli and courgette was a bit minging.

I’d have opted for a nice fresh salad myself, but I guess the meal planners were trying to keep costs down and use up the veg from the other meals. 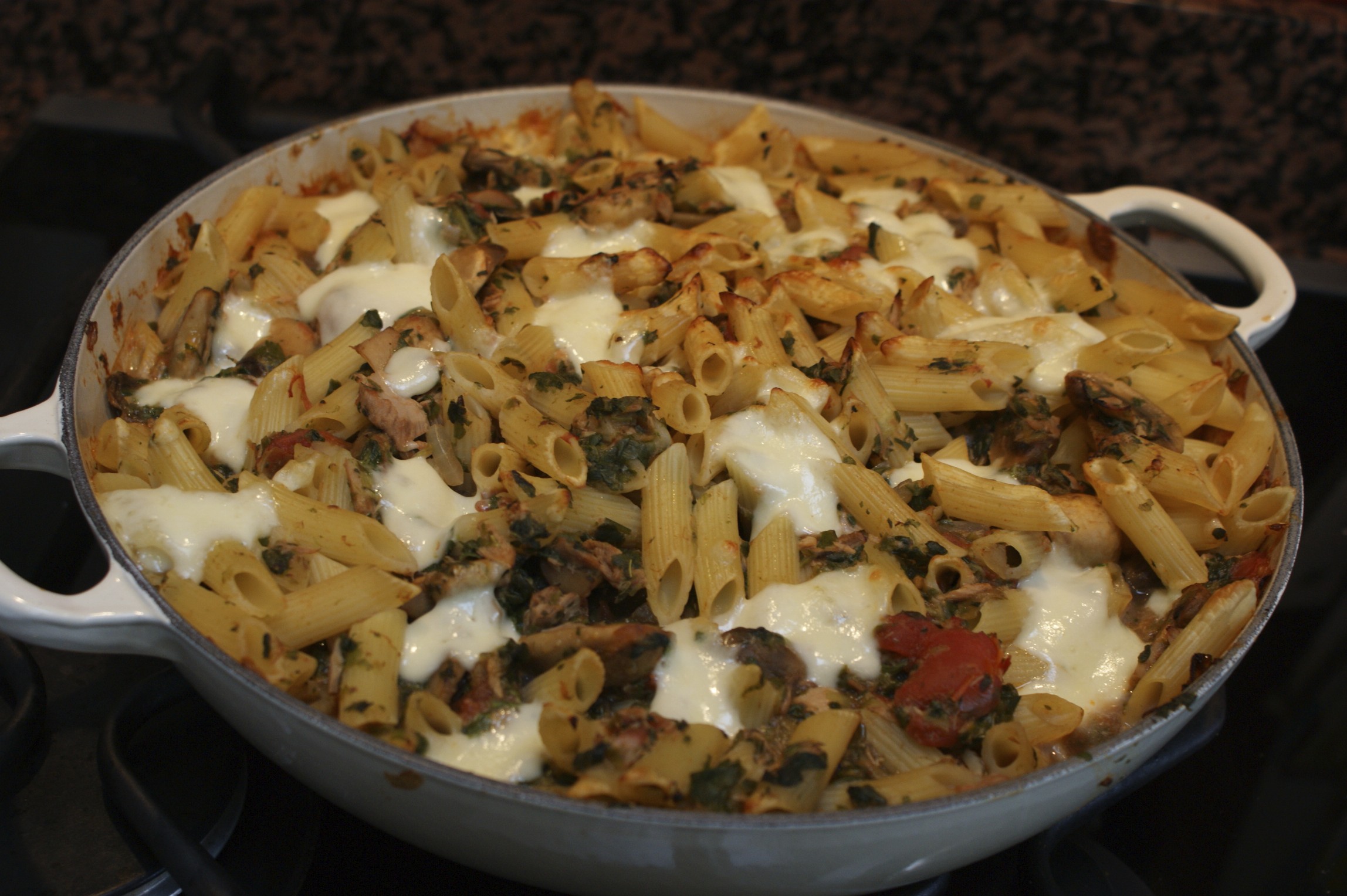 Another crowd pleaser was the Tuna, Mushroom and Mozzarella bake – again it made enough to feed a rugby team, but it certainly didn’t go to waste! It’s a really quick recipe – apart from the use of frozen spinach which you have to defrost and squeeze all the moisture out of. I’d be minded to leave that out in future and use fresh stuff wilted into it instead.

If you’re on a really tight budget, the Sainsbury’s meal plan is really good value for money. However you might not like all of the food, and there’s so far no option to switch recipes. I was left with a sea of bananas and flimsy basics bread – being thrifty though we made a couple of batches of banana bread and whacked the sliced bread in the freezer.

If they could work in some of the recipes from the Feed Your Family for a Fiver campaign so you could have more choice, then I think it would be an absolute winner. But as it is I’ll certainly be checking it out again for recipe inspiration but not following it slavishly meal-by-meal.

I’m all for meal plans, but generally when they’ve been designed by me!

Sainsbury’s have been kind enough to give FIVE of my readers £50 worth of shopping delivered to your door so you can try the weekly meal plan for yourself! Click here to enter my competition NOW as it’s not open for long!!!

Thanks to Sainsbury’s for sending me £50 worth of groceries so I could try out the menu planner, and for the bloggie video camera which I’m yet to fully get to grips with – hence lack of video clips on this blog post…

« Win £50 worth of Sainsbury’s groceries
Book Review and chance to win: My Daddy Cooks by Nick Coffer »