This is my first post as part of the Morphy Richards House Proud Innovators’ scheme. I’ll be sent a product from the Morphy Richards range to test out, review and share with you. There will also be the chance for you guys to win some cool gadgets too – watch this space.

As a kitchen gadget addict I jumped at the chance to get involved with this project – so I hope you enjoy reading my reviews and find them informative.

First up it’s the Morphy Richards Intellisteam currently available for £64.99. 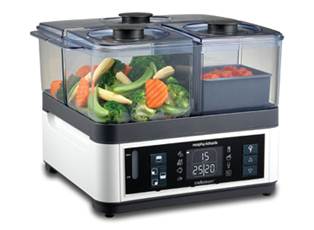 First impressions: It’s mahoooosive – almost as big as my microwave, but not as big as the Miele Steam Oven I tested last year. But it’s a practical square shape so with a bit of a reshuffle fits on my worktop or in my appliance cupboard if I could just be bothered to sort it out a bit.

As a friend recently rightly pointed out to me this week, kitchen equipment seems to be getting bigger, not smaller like other gadgets –  it’s just a shame they can’t invent bottomless cupboards to house them all in!

The design is sleek and pleasingly smart – it’s got feel appeal. I like the way the plug and cable fit neatly in the base of the unit.

It’s extremely simple to use – the control panel on the front of the steamer has minimal buttons so you soon get the hang of it. 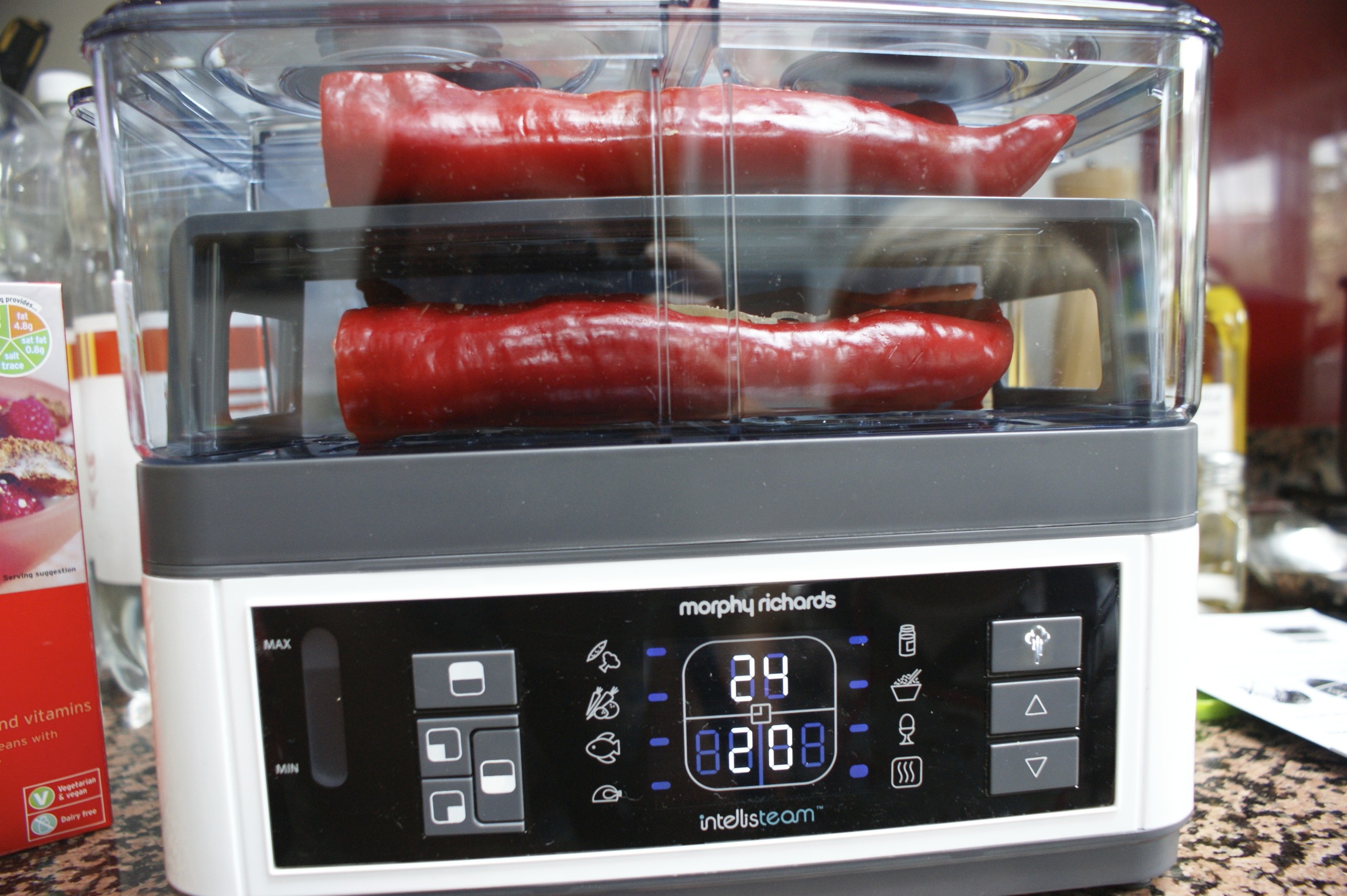 The name intellisteam relates to the fact that you can cook up to three components of your meal in it simultaneously, and no matter how long each bit takes to cook, the machine will finish cooking all three at the same time – marvellous!

So really all you need to do is the prep work in advance, bung it all in, set the timings of each bit of the meal and then hit go! This then frees you up to distract the hungry hoard with a quick game of footie in the garden until the bleeper chimes perkily to tell you dinner’s ready. That pleases me greatly.

Putting it through its paces

I decided to herald its arrival by road testing it with a vegetarian recipe – it’s a brave new world here folks! 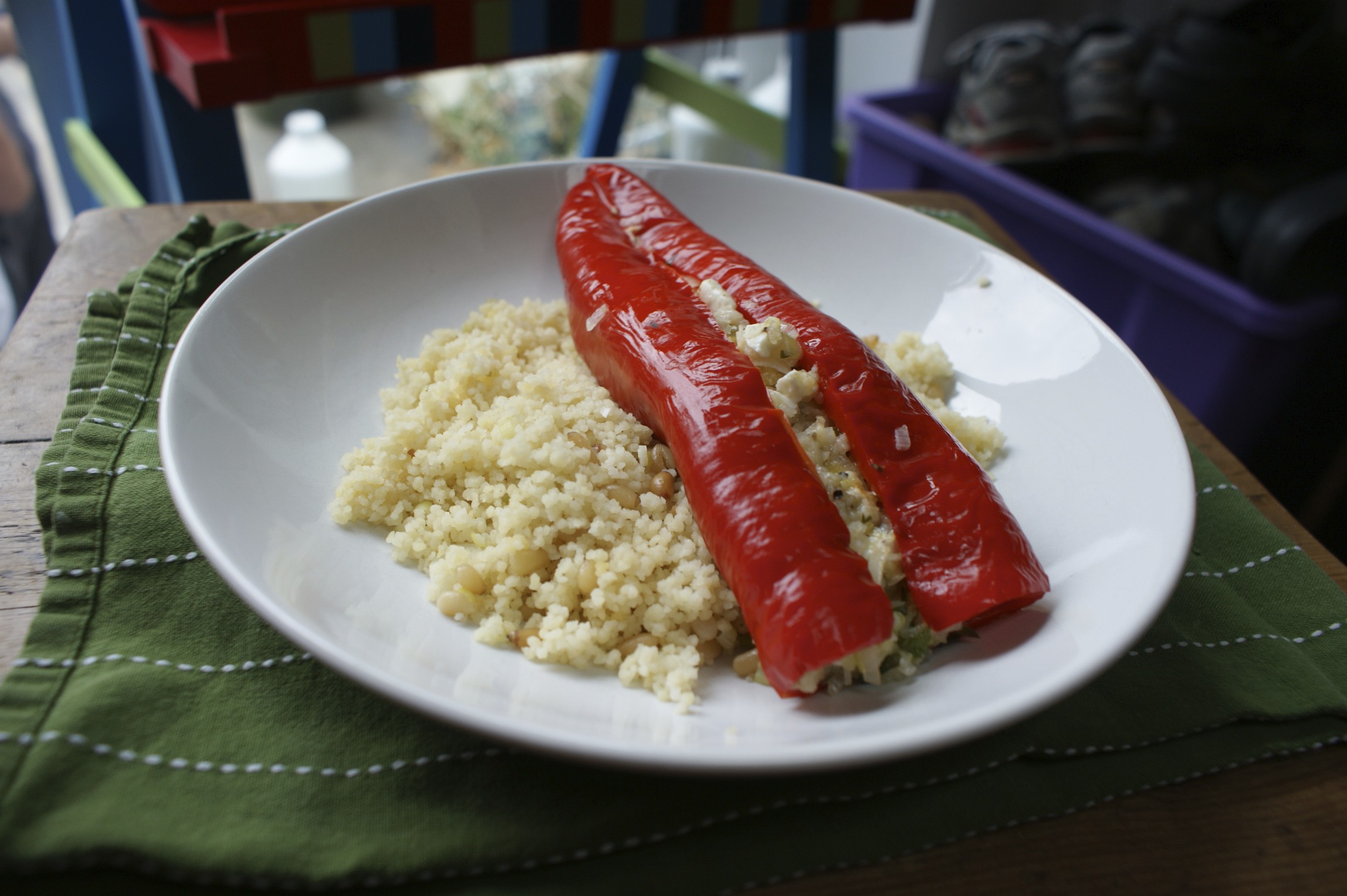 My hasty photography doesn’t really do it justice, BUT it was mightily tasty.  The mix of feta and parmesan cheeses with chopped leek in the filling gave it a satisfyingly punchy flavour, mellowed by the breadcrumbs and parsley. The couscous was steamed in vegetable stock, spring onions and pine nuts and was simply delicious.

The little ones struggled a little with the pepper filling as the cheese was so strong, but they vacuumed the couscous down. I think I’d be tempted to use milder cheese if I made it again for the boys.

The fledgling vegetarian loved it, so that was a relief.

Crucially it was a doddle to make – I assembled the stuffed peppers in 10 minutes when Arlo had his afternoon nap, then whacked them in the fridge until I needed them.

Once I was ready to get dinner ready it was just a case of putting everything into the steamer and switching it on. Arlo decided he liked the beeping sound it made when you touched the buttons so I had to keep him away from it.

It didn’t emit clouds of steam into the kitchen and it was really very quiet and well behaved. The only pesky bit of the process was washing it all up as our dishwasher is still out of action…

1. Split the peppers lengthways on one side, but don’t cut in half. Cut out the core and seeds. In a bowl mix the leek, parsley and olive oil, then stir in the parmesan cheese and breadcrumbs. Season well and then stuff equally inside the peppers.

2. Fill your steamer’s reservoir with water and then place the peppers in the largest compartment. Steam for 25 minutes.

3. Add couscous and 265ml cold water to the rice tray, then mix in stock powder, spring onions and pine nuts. Steam for 20 minutes, then allow to stand for 5 minutes then fluff up with a fork.

Of all the steamers I’ve tried, it’s definitely the best. Easy to use, looks great and performs brilliantly.

If you’re looking to clean up your act nutritionally then this would be well worth the investment.

My main concern is would I use it enough? I know that steaming is a wonderfully healthy way to prepare food, but I’m not convinced portions of steamed food would properly fuel the boys in my house of mayhem.

« Tortilla: The California-Mexican experience – plus giveaway!
May allotment update and awards news »