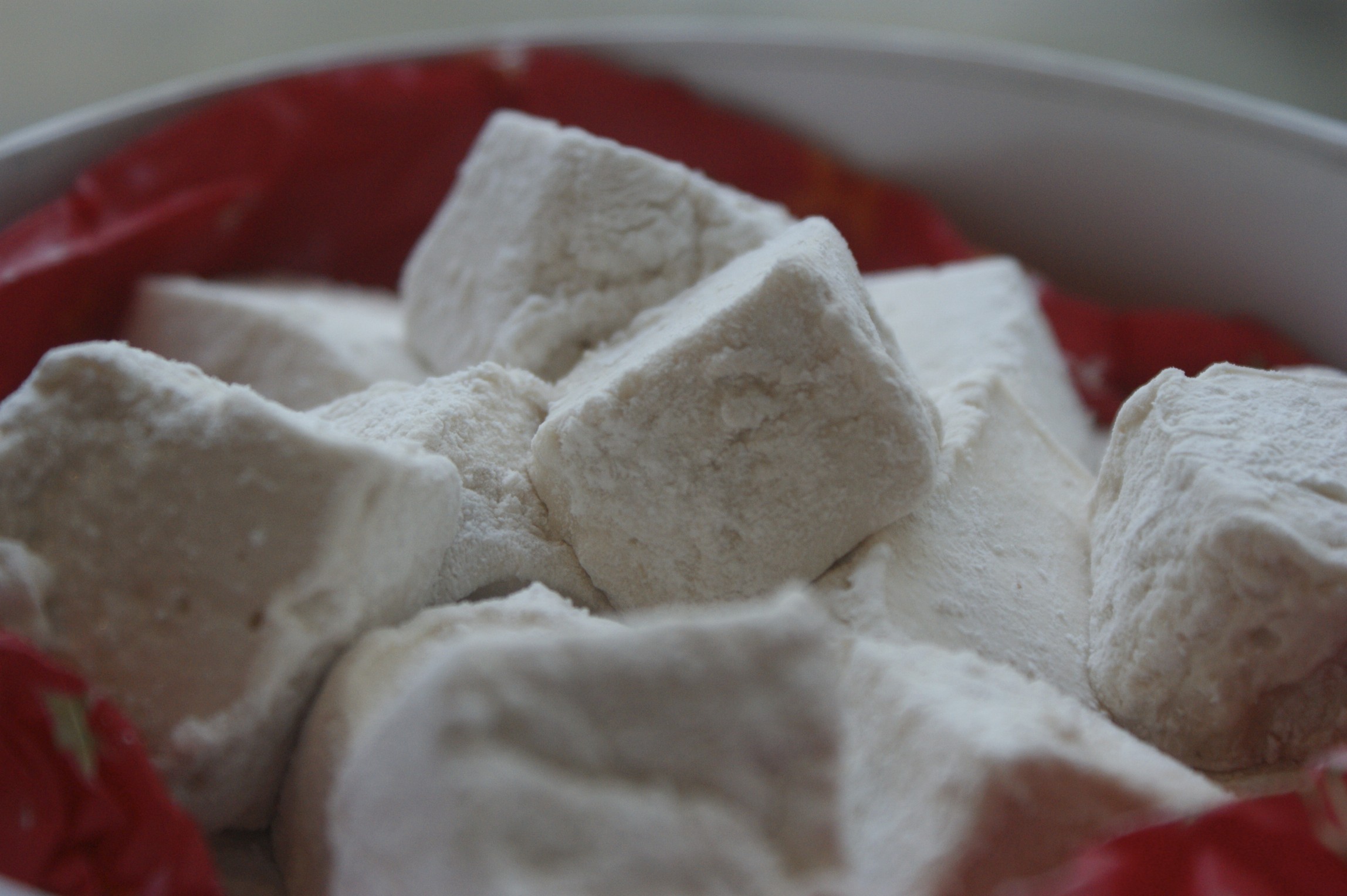 Easter is the perfect time to make sweet treats to both eat and give as gifts. Spurred on by my macaroon baking, I decided to take another brave pill and give marshmallows a try.

The cover of this month’s delicious. magazine boasts a picture of some very inviting looking marshmallows, so I used their featured based on a Bea’s of Bloomsbury recipe as my inspiration. You can find more marshmallow recipes on the delicious. website. 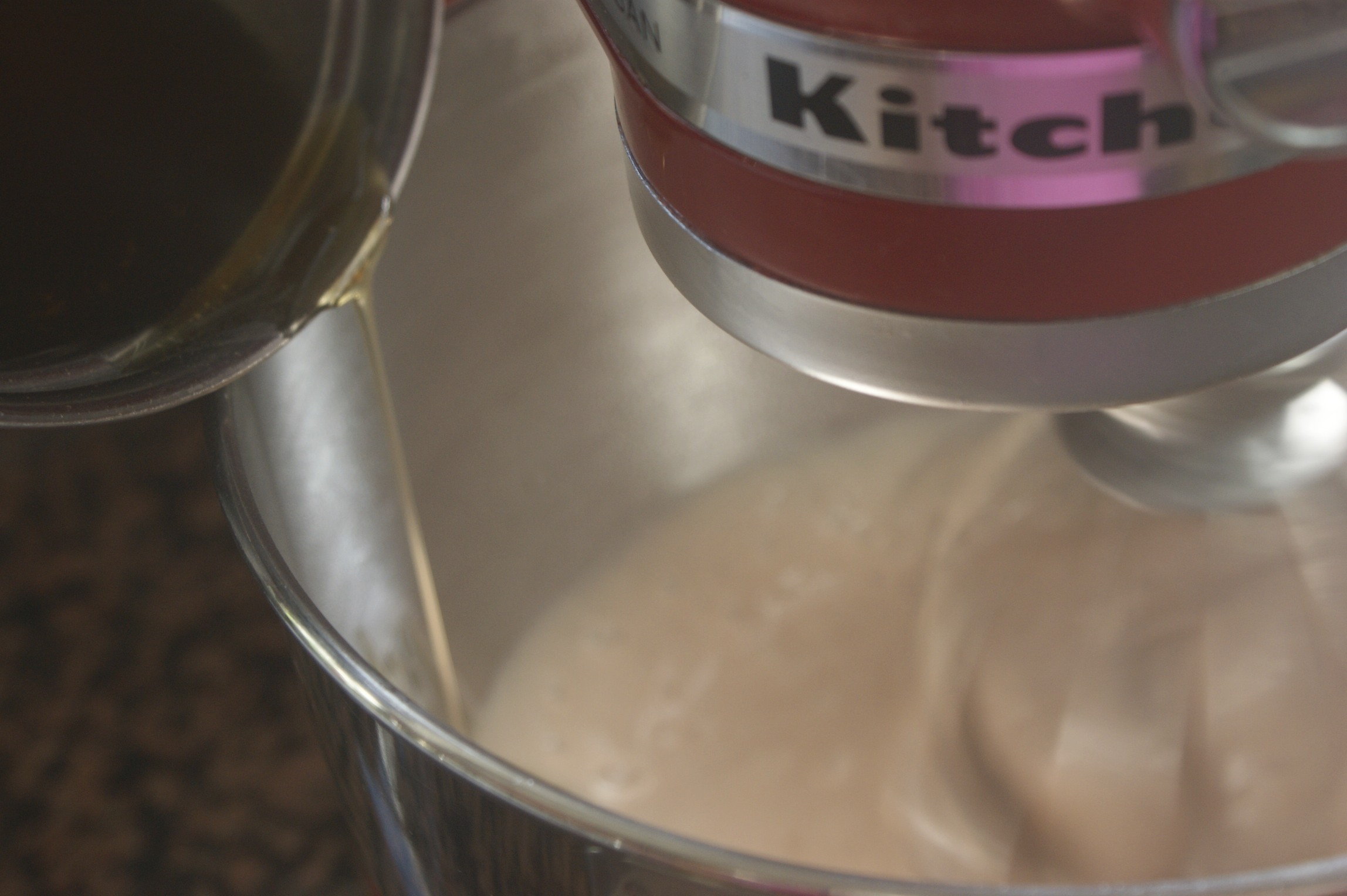 Pouring the hot syrup into the mixture

It’s not really kid-friendly cookery because there’s boiling sugar and thermometers involved, plus it gets INCREDIBLY sticky! However the results are perfect treats for little sweet-lovers. I used Innocent fruit smoothie as the basis of mine so the lovely flavours of strawberry and banana were an instant hit with Sam.

The beauty of this recipe,, is that you can use any flavouring you fancy. So you can keep it kiddie friendly by using fruity flavours, or get sophisticated with Baileys, cinnamon or pistachio if you’re making a gift for an adult.

The actual making of the marshmallows was pretty straightforward to start off with, but once it’d set, trying to peel off the cling film and cut it up was a major challenge. The fact that I tried to do it in the middle of a playdate was frankly idiotic. So I’d recommend doing it when you’re completely alone and able to concentrate on what you’re doing!!! I got there in the end though and it was thoroughly worthwhile because they look and taste fabulous. 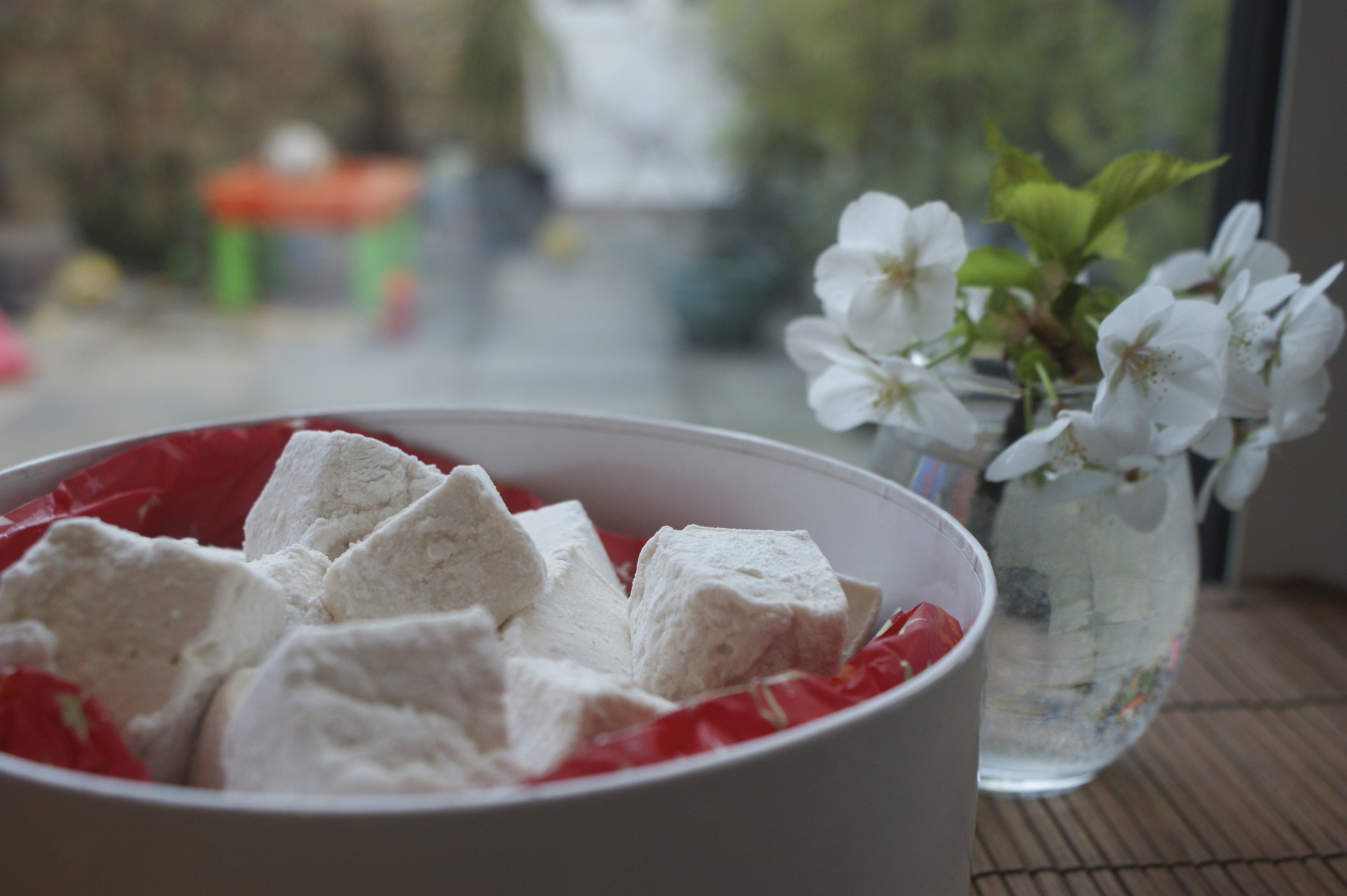 1. Pour the smoothie into the bowl of a food mixer and scatter the gelatine over the top and allow it to absorb – it looks quite odd and wrinkly but don’t worry!

2. Line the cake tin with cling film and coat thoroughly in vegetable oil.

3. In the mean time, put caster sugar and syrup in a pan and enough water to cover. Cook over a low heat until the sugar has dissolved then put your thermometer into the pan, turn up heat and bring to the boil. You’re aiming for the liquid to reach 130’C – no more than 140’C. This took at least 10-15 mins for me, but keep a close watch. Once it’s reached the right temp remove from the heat and leave to cool for just one minute.

4. Whisk the smoothie/gelatine combo on a medium speed and then very slowly and carefully with the whisk still running add the syrup at the side of the bowl. Don’t let the syrup get on the whisk itself or you’ll get sugar crystals in the marshmallow.

5. Keep mixing until it becomes really thick in texture. If you lift the whisk head out of the mixture thin bubblegum-like strands should appear. Pour into the prepared tin scraping the mixture out of the bowl with a greased spatula. Cover surface with greased clingfilm and leave to set for 1-2 hours until the top is firm when pressed.

6. Now for the VERY MESSY part. Have a bowl ready with the cornflour in. Grease your hands and a knife with vegetable oil. Remove the cling film from the surface of the tin, lift out the marshmallow using the rest of the cling film and then peel it off. Cut up into squares and then roll each chunk in the cornflour to give a pleasing white coating.

7.  Eat immediately or keep in an airtight container in a cool dry place for up to 2 weeks.

I cannot stress enough how messy stage 6 of this recipe is, but as long as you’re prepared to get sticky and have a bit of patience with it you’ll be fine!