To a lot of people, living in London probably conjures up thoughts of an anonymous urban existence where everyone ignores each other and cars don’t stop at zebra crossings.

Well this has certainly been my experience of London life until I moved beyond Zone 2. My version of neighbours in Shepherds Bush were people who thought it was acceptable to hammer on the bedroom window of your flat from the fire escape in the middle of the night demanding to be let in. 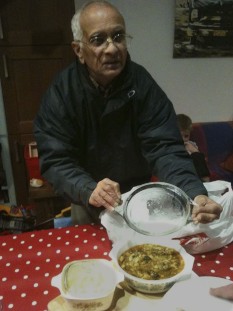 Yet we find ourselves a mere three miles away in Ealing and it couldn’t be more different. Well people still try and mow you down on zebra crossings, but we have the world’s BEST neighbour!

Ken lives over the road from us and has adopted our little family. He takes care of our house when we’re on holiday, he lends us tools, he even drove me to Sam’s nursery in Hammersmith every day of the six weeks I couldn’t drive after having Arlo!

Tonight he brought over a home-cooked curry just because he thought we might like to try some traditional Indian cooking!

He doesn’t want anything in return – just our honest feedback about how it tastes. The guy is a genuine legend. 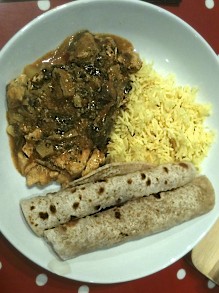 The chicken curry was fragrant and gently spiced – not blow-your-head-off hot, but a warmth that builds throughout the meal. There were spinach and potatoes in there too giving it a really wholesome and satisfying quality.

We were also treated to some delicious side dishes of pilau rice, wholemeal chapatis and poppadoms. All delicious and far superior to the over-priced take-aways around here!

I’m hoping Ken’ll share the recipe with me, but i’m not confident he’ll want to divulge his secrets!

This could be the start of something inspiring. Why don’t more people share their food with their neighbours? It’s a great way to get to know people and perhaps try some new cuisines.

It also creates a really good feeling that someone out there is kind enough to want to cook delicious food for my family. It gives you faith in people that can get easily trampled on in this harsh world.

Is there someone elderly living alone in your road? Maybe a family’s just had a baby? There are so many people out there who’d be taken aback and delighted by the offer of a home-cooked meal or a jar of jam.

Next time you’re off on holiday why not donate your perishable food to your neighbours instead of dumping it?

There are so many things we can do to create a warmer feel in our communities and it also cuts down on waste which has to be a good thing right?

People like Ken are a rare breed, but that doesn’t mean we can’t try and be more giving ourselves. It’s about taking a little more time to really see the people around you.

Have a great weekend everyone!