Trying to get young children to sit at a table and eat properly is a daily challenge.

Sam my four year old is a pretty good eater. I put it down to his going to daycare nursery from 11 months and sitting around a table with his peers and tucking into a good meal every day. He was deftly using cutlery by himself pretty early.

Arlo has been a little slower off the mark, however he’s happy enough to use a fork and spoon these days, until he loses interest in what he’s eating and launches it around the kitchen or simply rubs it into his baby-blonde locks. Tomato soup gives him particularly attractive orange highlights. The poor dog can often be found wandering around the house with scraps of scrambled egg on her back!

So I was delighted to be approached by Glenda Gee from website Cutlery and Catering to see if I’d review some examples from their children’s range.

Glenda and her husband Peter have been selling cutlery for over 25 years so are total specialists. They have a great range of stainless steel cutlery and have also branched out into kitchen gadgets and cookware.

I’ve been using a fairly random assortment of cutlery since having the boys. I have the brightly coloured plastic assortment from Ikea, which the kids have liked using but it’s not worn terribly well.

I have a lovely stainless steel set we got in the sales from John Lewis a couple of years ago which has definitely been my favourite as it’s easy to use and maintains its good looks.

But I’ve never felt like I’ve had enough, especially when we have kids around for after school tea dates, so I’d been thinking about investing in a larger set of stainless steel. 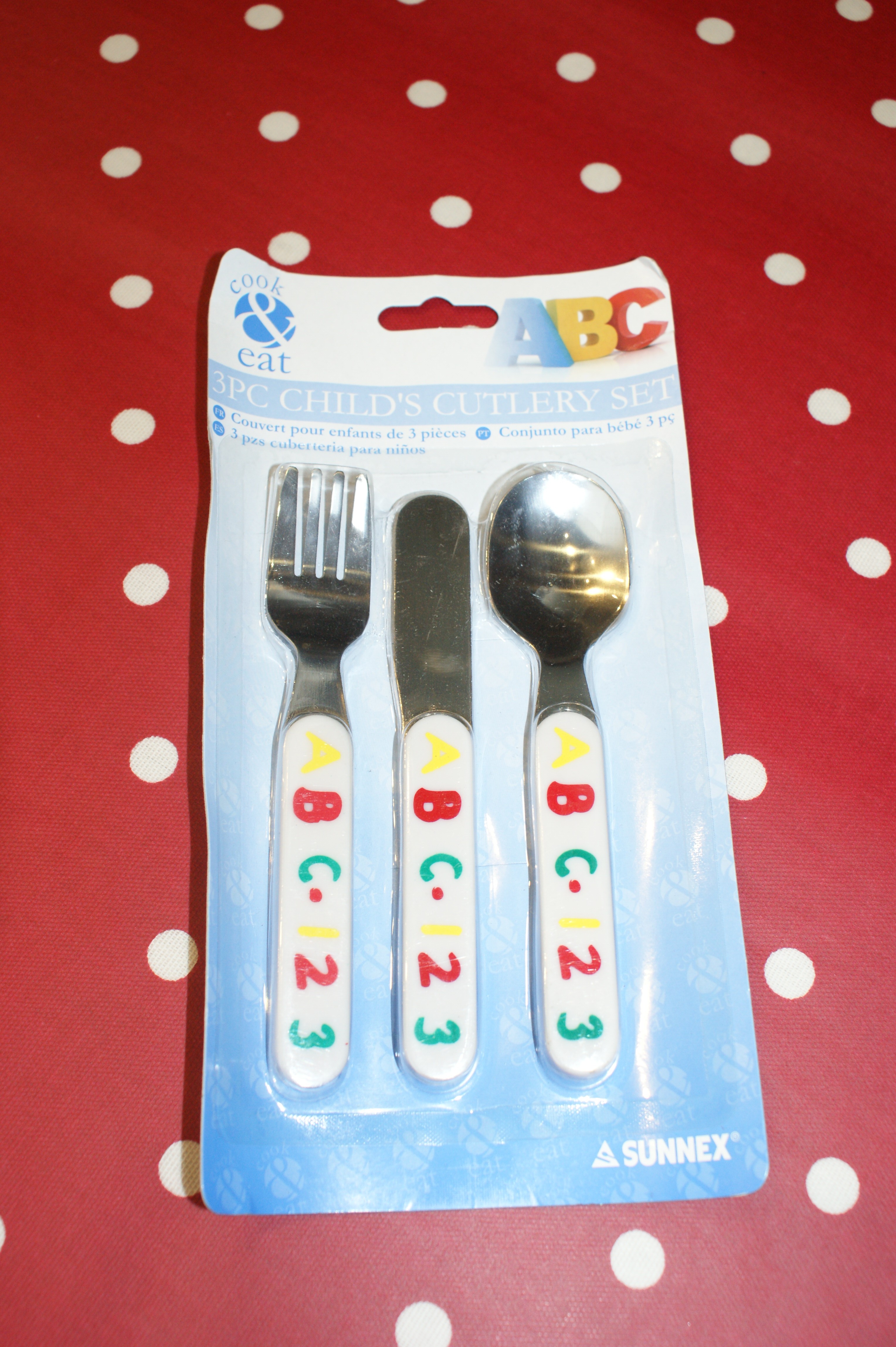 For Arlo, Glenda sent through the ABC Design for toddlers:

This is an ideal first set and the handles are made in an attractive ABC design plastic. The set is colourful and bright.  Children feel very grown up using this little set with the brightly coloured letters on its handle. The knife is not sharp for safety reasons.

I think they’re reasonably priced, fun to look at and a good size for a toddler to get hold of. The head of the spoon is quite flat and wide, so littlies stand a good chance of shovelling a decent mouthful of food in with it. The fork is similarly wide, so again a good tool for the cutlery novice! 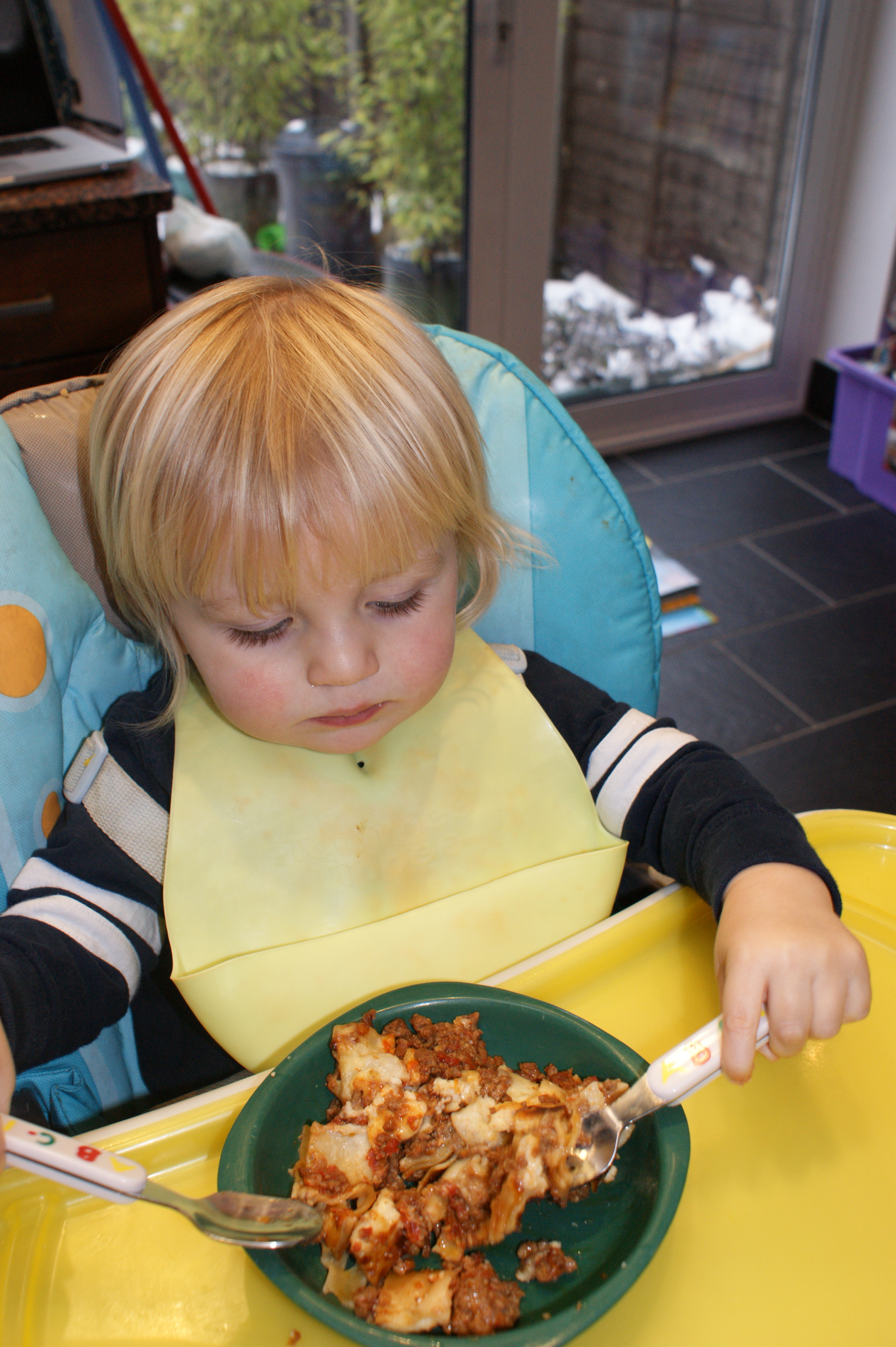 I’m a bit mystified about how to teach a toddler to use a knife, so find them a little pointless in these sets. This one doesn’t have a serrated edge so I’m guessing it’s to be used to push food onto a fork or spoon. I think this is perhaps a bit too advanced.

Arlo was happy with the fork and spoon and used both at once, which he has never done before.

He also thought they were great musical instruments and clattered them with pleasure before running them through his hair for good measure.

For Sam we were sent the Windsor set consisting of a knife, for and spoon, priced at £4.50 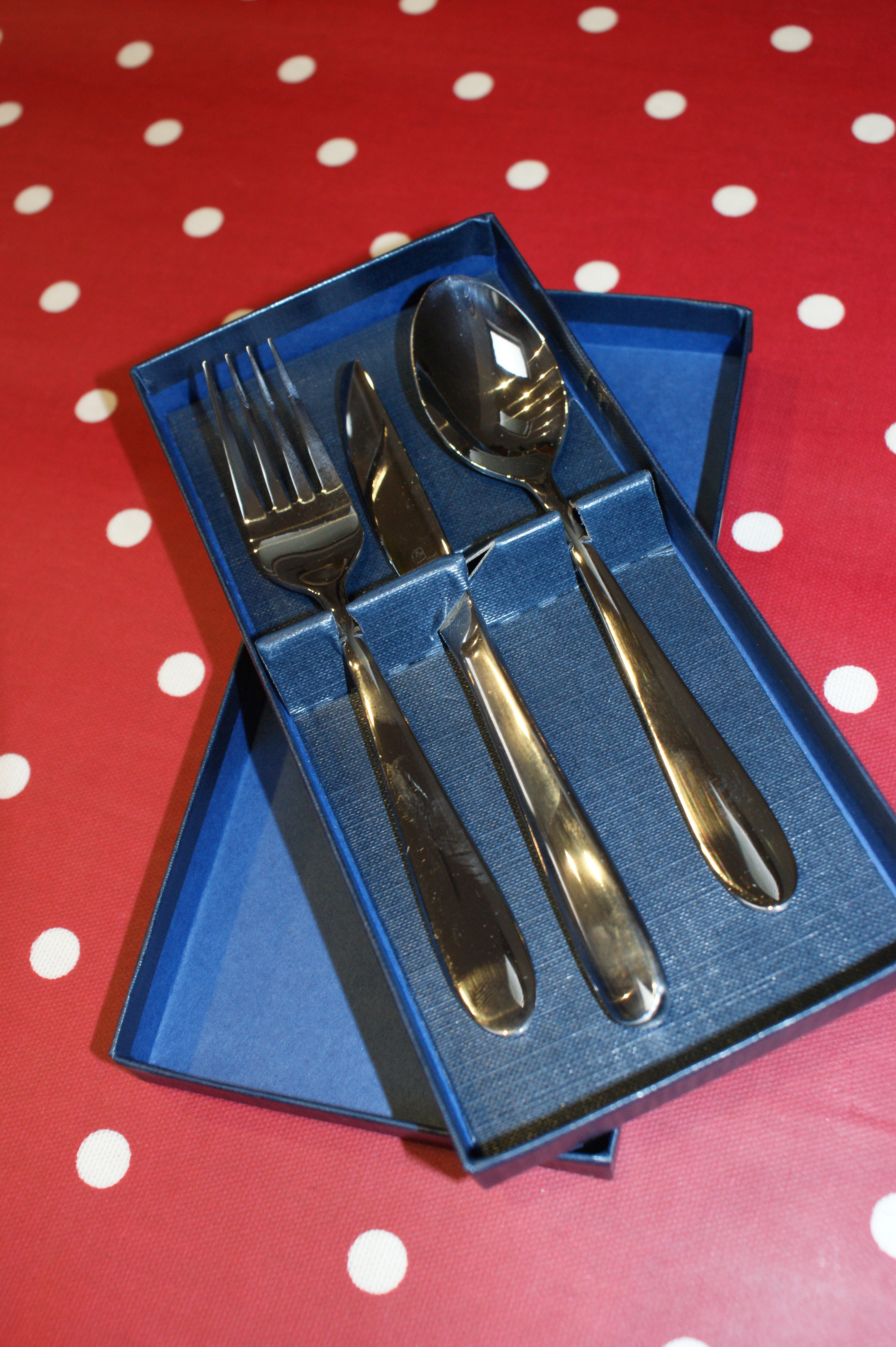 This set is ideal for that in-between stage when children have passed beyond the nursery stage of cutlery but their hands are too small for full-sized adult cutlery.

The knife  has a gentle serration so that children can cut their own food with it.  The fork is approx 16 cm long and the spoon is the same length – larger than a teaspoon but smaller than an adult’s dessert spoon.  The knife is 16.5cm long.

The set is made of high quality  stainless steel so you can put it in the dishwasher. It is made in Windsor design and will match all our other items in this popular range.

Sam was delighted to have some new cutlery and it really did seem a more comfortable fit for him than the more babyish stuff he’d been using before. 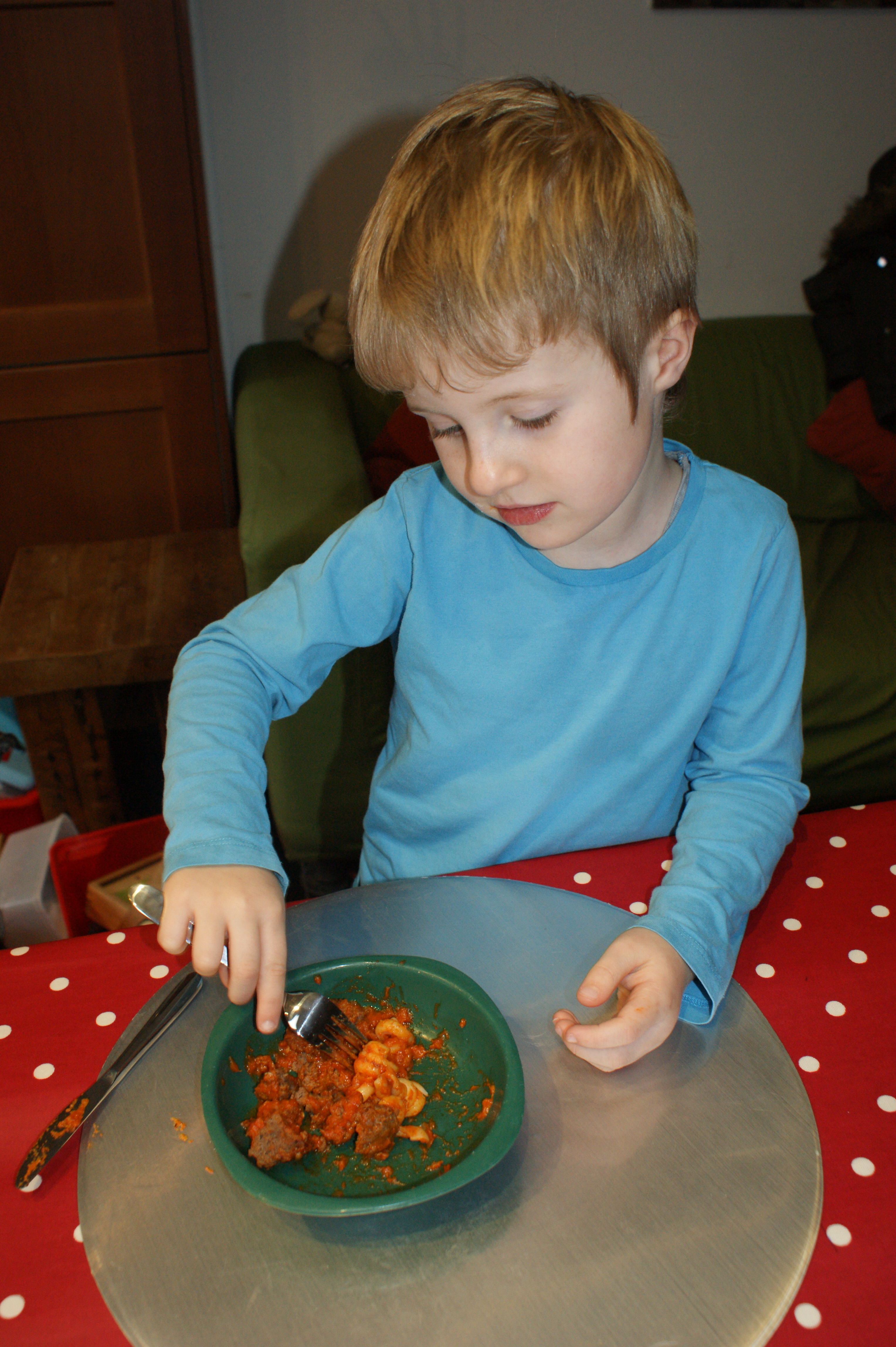 The knife is sharp enough to cut food effectively which is a real bonus because it can be frustrating teaching them to cut up their own food if their knife isn’t doing a very good job.

£4.50 for the set doesn’t break the bank, so you could invest in a few sets that would last for years.

You can win both sets of cutlery featured in this post!

THIS COMPETITION  IS NOW CLOSED!!!!

There is one mandatory way to enter and a couple of other things you can do to get some bonus entries.

The winner will be chosen using an online randomiser and announced in a subsequent post on this blog.

1. Mandatory. Leave a comment below telling me about the most chaotic meal time you’ve ever had with your children. It could have been an excruciating time in a restaurant, or maybe your little monsters created havoc at a relative’s house? I want to hear ALL about it!

2. Second chance to win, tweet a link to this giveaway as follows: “Win toddler and child cutlery sets @cookingkt” WITH A LINK TO THIS POST. Then leave a second comment saying you’ve done so telling me your Twitter ID.

You must leave a further separate comment for each bonus entry otherwise they cannot be selected in the draw.

Closing date: midnight GMT on Sunday 2nd January 2011.
The winner will be notified by email. If the winner does not reply within 48 hours, a new winner will be drawn.
Good luck and Merry Christmas!
This giveaway is open to readers with UK mailing addresses. Readers from overseas are welcome to enter provided they can give the UK mailing address of a friend to receive the gift on their behalf with any onward delivery being at their own cost.
« Christmas Cranberry scoffins with cream cheese frosting
mmm… a truly North Eastern foodie gem »