I had my university friends over for dinner at the weekend – it was originally meant to be festive drinks in town, but I suggested a cosy dinner at my place would avoid the seasonal mayhem and expense of central London.

I then got mildly freaked out that I’d not cooked for a dinner party for a long long time, and that I was going to let the side down with non-matching chipped crockery. Idiot. I promptly snapped myself out of that – these are my best friends for god’s sake! As long as they’re got plenty of booze on the go, they won’t even notice!

I also took the heat off myself by sharing the meal prep around the group. Ele and Rich bought the nibbles, Jonny the starter, I did the main and Ris and Dan bought the dessert. When you’ve got two small children to look after there is a limit to how much time you can spend on one meal, so I can thoroughly recommend this approach. No one seemed to mind.

I was going to offer up mulled wine as a welcome tipple, but after a flick through some magazines I came up with the far more inspiring prospect of Apple Rum Cocktails!!

The recipe’s from the November issue of Waitrose Kitchen magazine in an article about Rachel Allen’s effortless weekend parties. I tried not to feel nauseous after reading the rather breathless piece about her seemingly perfect-looking life as she cooks for the masses in her beachside kitchen and looks immaculate despite having three kids. 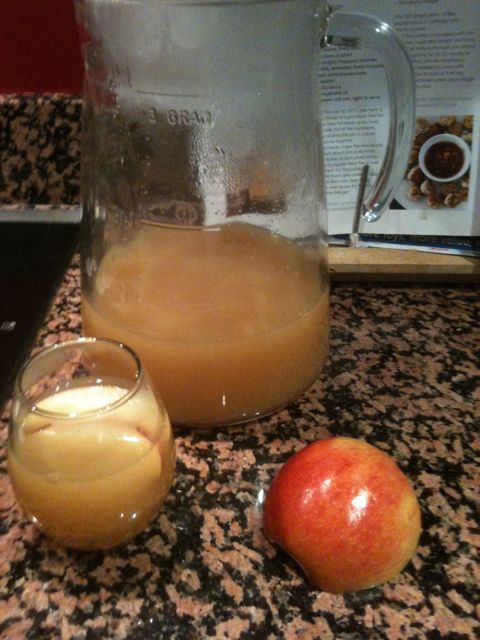 Anyway I’ll forgive her because her Apple Rum Cocktails are AMAZING!!!! My friends were absolutely loving them and we got through an entire jug pretty swiftly. It’s warming, delicious and almost feels good for you!

I got it all prepped in advance and then just put it on a low heat for a while, then just before I wanted to serve it I removed it from the heat and let it cool slightly before pouring into a glass jug.

For the main course I went around the houses trying to think of the perfect thing to cook. Something that’d show I loved cooking, but at the same time something I could make well in advance and not have to faff about with on the night. I hate being distracted when my friends are around, I like to soak up their company as much as possible. It’s so rare that we’re all in a room at the same time these days!

I decided that some kind of Thai curry would lend the right amount of sophistication, offer warmth on an exceptionally cold day and also allow me to prepare most of it in advance.

I found inspiration on twitter – thanks to everyone for their ideas. In the end I went with Alan Rosenthal from @stewed, who has an array of one pot dishes in his new recipe book Stewed! 80 Irresistible Stews & One-Pot Wonders. He recommended the Beef Massaman Curry.

I normally use chicken when I make any kind of curry, so I was up for a change. I’ve made some of Alan’s recipes before and they’ve been divine, so I trusted that this would be a corker. And it was!

For my blog I ordinarily try and stay away from dishes that have a myriad of ingredients and complex instructions. That’s because I’m a family cook, trying to please little and big people all at the same time and when I get all fancy on them they don’t tend to appreciate it.

So to get the chance to cook for a purely grown up crowd was a real luxury because I knew they’d value it. It was a labour of love that afternoon concocting the rather intricate curry paste – toasting peanuts, coconut and an array of spices and pounding them in a mortar and pestle. Taking the seeds out of each individual cardamom pods felt like such a luxury. Thank god Arlo is having long afternoon naps these days! 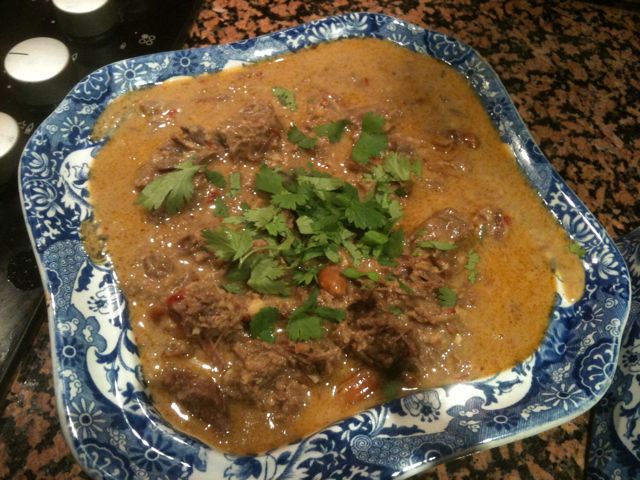 So while I made my curry paste, I also simmered the beef in coconut milk for a couple of hours so that once my guests arrived, all I needed to do was combine the two while steaming the rice. Easy peasy.

It also helped vastly that some of my friends turned up early and helped me get the kids to bed so I could set the table and light candles.

The curry went down an absolute treat. Warm and gently spiced – not something that blows your head off but makes your mouth tingle and turns up your inner thermometer!

Pour the coconut milk over the beef in a heavy based saucepan. Bring to simmering point and cook gently for 2 hours, stirring occasionally until the beef is tender. (I let mine cook for 3 hours and it was falling apart tender which is how I like it)

Pour boiling water over the chillies and leave to soak for up to 30 minutes. While you’re waiting preheat the oven to 190’C and then roast the peanuts for the paste and for the curry. Tip all the peanuts onto a baking tray and place in the hot oven for 10 minutes or until they have turned golden brown. Keep an eye on them as you don’t want them to burn. Remove and allow to cool.

Heat a dry pan on the hob and tip in the desiccated coconut. Stir continuously and cook gently for a bout 3-4 minutes until it turns golden brown (it took about 1-2 mins for me so be careful). Set aside in a bowl for later.

Heat the pan you used for the coconut and add the bay leaves, cloves and cardamom pods. Stir regularly. After about 2 minutes the bay leaves will have started to turn darker and light brown around the edges. Transfer them to a mortar and pestle. Continue cooking the other spices for a few more minutes until the fragrances are released. Now tip them into the mortar too and allow to cool.

Remove the seeds from the roasted cardamom pods, discard the husks and grind with the bay leaves and cloves to a fine powder. Next add half of the roasted peanuts, continuing to grind to break them up.

Drain and roughly chop the chillies with a pair of scissors, then add them to the spice mix along with the salt. Continue to pound with the pestle until you’ve got as smooth a paste as possible.

When the beef is tender, drain the cooking liquor, reserving it for later, and put the beef, curry paste, peanuts, chopped ginger and cinnamon stick into the pan used for cooking the beef. Cook on a low flame, stirring regularly, for 3-4 minutes until the spices become aromatic.

Now return the beef cooking liquor to the pan and add the fish sauce, sugar and tamarind and water (or lime juice) mixture. Cook for a further 5 minutes, stirring regularly. Taste to make sure it’d well balanced and equally sweet, salty and sour.

Drain and roughly chop the chillies with a pair of scissors.

p.s please excuse slightly ropey nature of the photos in this post – I was busy being a hostess 🙂