I have a deep affection for all things potato. Chips, mash, roasties, baked, boiled, crisps…. mmmmmm so good! But one potato product i’ve never tried to make are rosti. 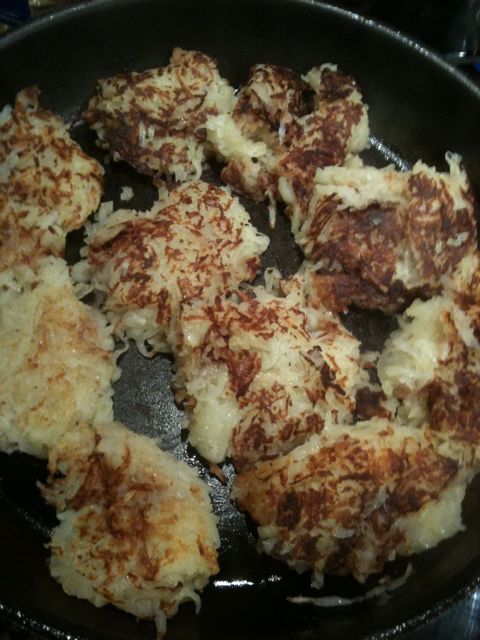 The divine potato cakes originate in Switzerland where they were commonly noshed by hard-working famers for breakfast. In case you don’t know they’re made out of grated potato and fried in a pan with butter and olive oil. Delish!

The beauty of the rosti is you can add whatever you like to them to make them even more delicious, say a spot of crushed garlic, some chopped fresh herbs, bacon, cheese – whatever you’re in the mood for.

I knocked some up for the kids with a hint of garlic and they were regarded with some suspicion, but Arlo wolfed his down like his life depended on it. I served them with poached eggs and some peas. A really simple after-school supper.

I made quite a large batch, so Matthew and I ate them with the leftover chunky meatball soup which was an utterly lovely combo!

1. Place the whole potatoes in their skins in a large pan of cold salted water, and bring to the boil. Bubble away for 10 mins. You’re aiming for a firm but tender feel. Drain and allow to cool for at least 30 minutes.

2. Peel the potatoes then coarsely grate them into a bowl, adding seasoning and the garlic. Mix together thoroughly.

3. Melt the butter and olive oil in a large non-stick frying pan. When the pan is hot, add the potato and cook for five minutes over a medium/high heat. When the underside starts turning golden turn the mixture over, then using a metal slice, divide into roughly circular ‘cakes’, about 2cm deep in the pan.

4. Press each cake down slightly with the slice and cook for a further five minutes on a high heat, then flip them over and turn down the heat to low/medium.  Cook gently for a further 10 minutes on each side, checking occasionally to make sure that the potato does not burn.