Risotto is a fabulous comforting one pot meal,  but it requires much love and attention – the constant stirring to give it that gorgeous creamy quality. So when you’ve got a demented toddler wielding a light sabre and indiscriminately bashing the living daylights out of the TV, the dog and his big brother you kind of need a dinner that’ll cook itself.

I’d heard people talk about risottos that you could just whack in the oven, but never quite believed it could work. So I hunted out a recipe on the brilliant Sainsbury’s website to try it for myself.

The recipe I found is pitched at students as it’s budget friendly and requires little attention. That’s a nice way of saying cheap and lazy! This totally works for frazzled parents who are trying to eek out their weekly shop – you can find most of the ingrendients for this recipe lurking in your cupboards and fridge/freezer. Obviously we’re not a lazy crowd us mums and dads… but time is rarely on our side so any shortcuts are genius in my book. 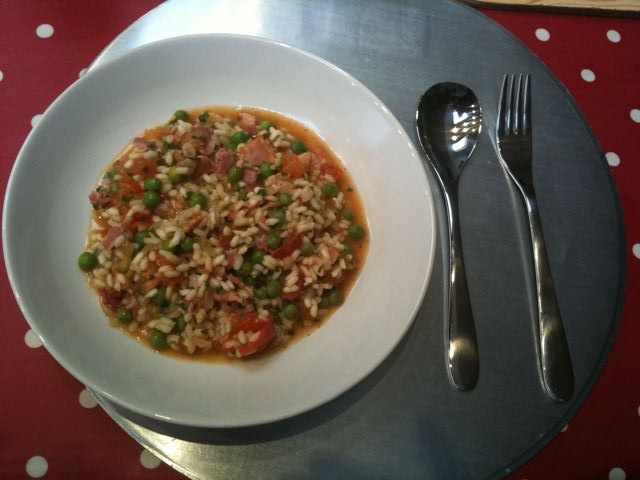 My risotto took a bit longer to cook than the recipe stated, so check if the rice is done properly. I ended up putting mine back in for another 10 minutes.

The texture isn’t as creamy as a risotto that you labour over, but it’s a tasty, easy-to-eat dish that went down well with the entire family. It’s not the sort of recipe you’d choose to dazzle dinner guests – but it’s a great weeknight supper if you’re short on time and cash! Who’d have thought that students and frazzled parents had so much in common…