Today was mostly about shellfish – not something I’ve always been mad-keen on but I psyched myself up for it. When I’m paying through the nose to do a course, I want to get everything out of it I can, and also challenge myself and my pre-conceptions about food.

You can spend your whole life thinking you don’t like a certain kind of food – either you’ve had a bad experience or it just looks unappetising so you never try it. I’ve come to the conclusion that life is just too short to be missing out on potential taste sensations! So I tried everything today despite my reservations.

A lot of killing went down in the demonstration kitchen, they should have had police tape around the work surfaces it was that relentless.

First the scallops went under the knife. Well only a pallette knife – so it was quite a quick and gentle ending for these guys.

Once released from their shells and all the entrails and gubbins were cut away, Phil pan fried them and served them up with fabulous pea fritters, pea puree and deep-fried leek and ginger. He also made great prosucuttio crisps by putting slices of the meat between two sheets of greaseproof paper and baking it in a 200 oven for a few minutes.

It was a sweet and delicious dish with a bit of a kick at the end from the ginger. Fabulous. 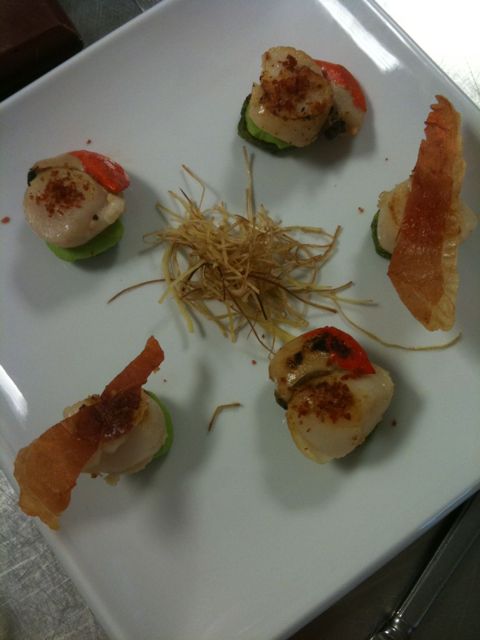 Next to bite the bullet was the crab. This was probably the most distressing of all the killings. Don’t get me wrong, Phil did it as quickly and as humanely as the RSPCA require, but the crab was moving while it was going on which is just not pleasant. It soon stopped though!

Phil then demonstrated how to remove the white and brown meat. What a painstaking job that is. Not sure I’ll be killing or preparing fresh crab anytime soon. He presented it as a beautiful Tian of Crab – a tower layered up with the two different colours of crab meat in mayonnaise along with fresh tomatoes and avacado. He whizzed up a Gazpacho sauce to go around the edge of the Tian. The salad leaves were beetroot and pea shoots – very trendy right now and dead easy to cultivate yourself. The result was beautiful as you can see. 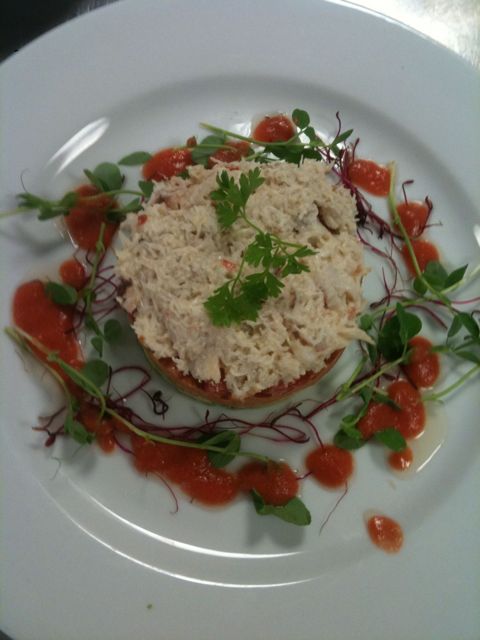 Then the lobster got it in the neck. We’ve got to do this ourselves on Thursday so we had to pay attention. You basically have to drive a huge knife through its head to shut down its nervous system, then you very quickly cut the whole thing in half lengthways.

It was grilled and served with a divine beurre blanc. A very simple meal but finger-licking amazing.

It’ll be very interesting to see how we get on preparing them ourselves on Thursday. Not sure if I’ll be able to go through with actually killing it, but we’ll see. If you’re going to eat something, surely you should be prepared to end its life also. Great in theory… but if this was the case with pigs and cows I’d be a vegetarian by now! 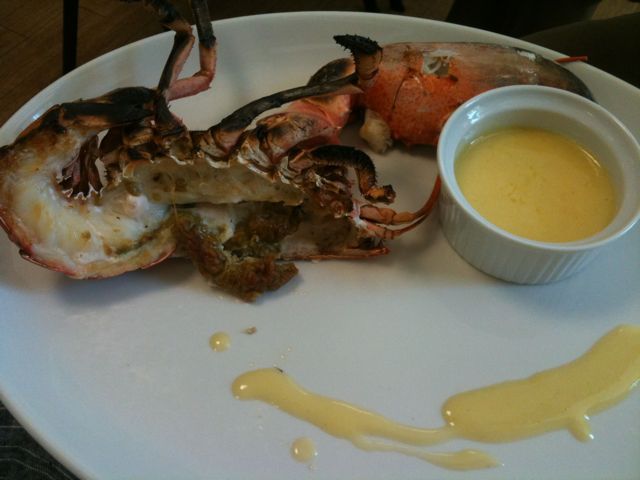 Langoustines met a watery end as they were plunged into boiling water. They were served with a divine samphire salad dressed with walnut oil, sunflower oil, lemon zest and juice, mustard, sugar, anchovy essence and salt and pepper. Phil also put in the salad thinly sliced red onions that had been soaked in red wine vinegar overnight to bring out their colour.

This is definitely a salad I’d love to recreate at home. It looks great with the strong and contrasting colours and this is backed up by bold and salty flavours. Not a wimpy salad! 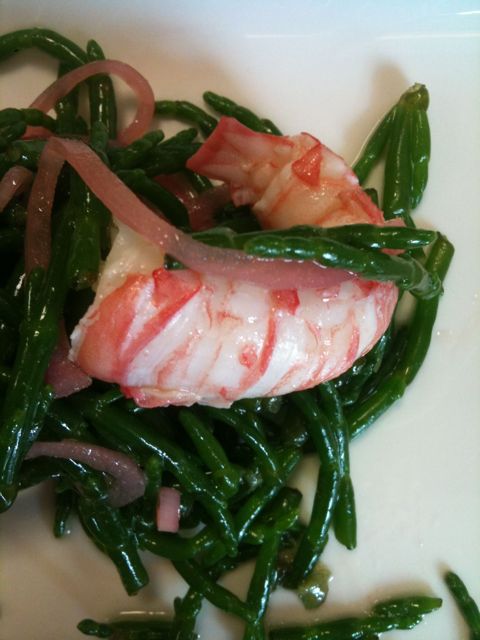 The last dish of the day was by far the biggest challenge for my levels of food adventure. Oysters! Never tried them before – they look so creepy. I wasn’t worried about how they’d taste, more about their texture.

But I decided to take the plunge and I’m so glad I did. I’d describe the taste and texture as refreshing. I didn’t just swallow, I chewed it aswell. Properly brave. They were served with a splodge of red onion and a dash of tobasco to pack some punch. 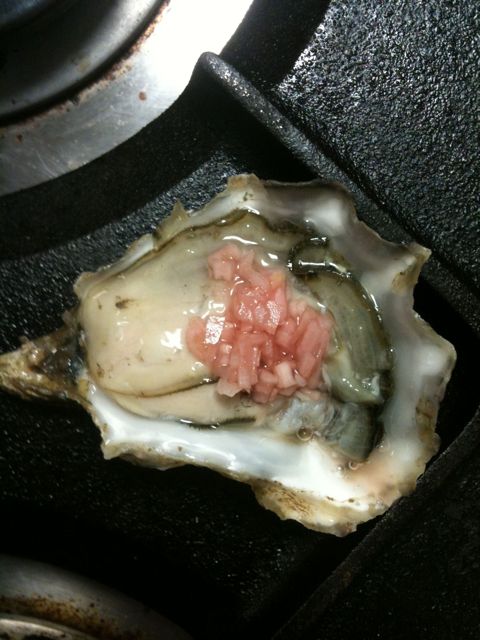 I felt really energised after the seafood demonstration – I love trying new things. I’m also really enjoying watching how they present the food so beautifully. I really want to make more effort with how my food looks now.

So it was into the kitchen for the rest of the day with the brilliant Sue and Shauna – they run a tight ship but they’ve got a wry sense of humour so are a lot of fun to work with.

First of all we finished off our plum and orange chutneys from yesterday. Feel very proud that I’ve made jam and chutney in the space of a week! 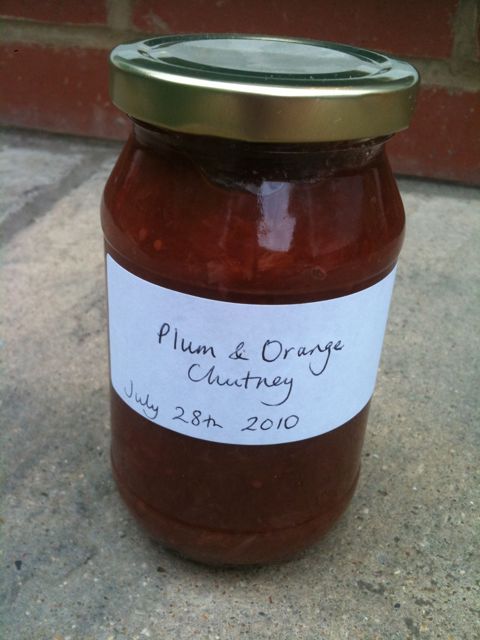 Then we started making our brioche dough which we will finish off making tomorrow. It’s a very sticky customer and took a lot of elbow grease to work in all of the butter. But I’m sure we’ll be rewarded with lovely fluffy loaves tomorrow.

Finally it was our turn to get our hands on some live scallops. We were given six enormous specimins each, so we set about them with pallette knives and prised them out of their shells. It was actually a lot easier than I imagined and hugely satisfying transforming them from weird looking aliens with entrails to clean white discs.

We knocked up a delicious pesto to serve with them. This consists of garlic, fresh parsley, pine nuts, pecorino cheese and olive oil all blizted in the processor. SO tasty!!!

So we pan fried the scallops for just over a minute each side, put them on a blob of pesto, drizzled some chilli oil over them and served them up with (very correctly cut) lemon wedges. 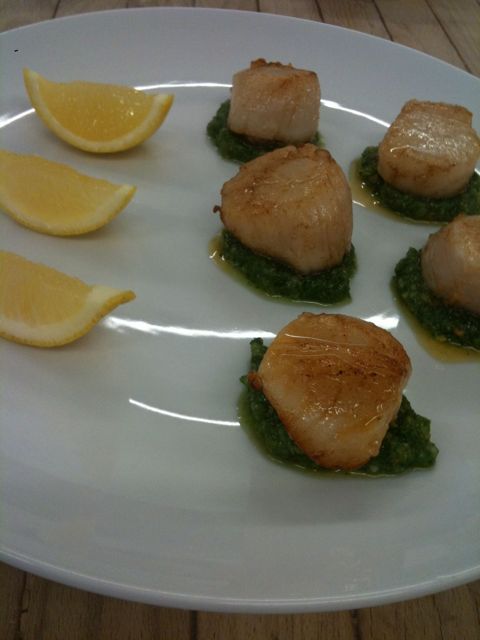 I think this has been one of my favourite days so far at Leiths because it’s felt so inspiring. It’s such a positive learning environment – the teachers’ enthusiasm and knowledge is  infectious. You just know you’re learning from the best.