After much stressing about the impending downpours forecast in London on Saturday, I bit the bullet and decided to have Arlo’s birthday picnic in Kew Gardens anyway. It’s very British to have a picnic in all weather condidtions – I like to think anyway!!!

But the sun came out and we actually applied sun cream – result! We were celebrating Arlo’s first birthday and having a bit of a casual naming party with his godparents – or VIPS as Matthew has rebranded them.

I don’t know why I was fretting about not having enough food either – I really did make enough nosh to feed the entire picnicking community at Climbers and Creepers. Ah well – better that than not have enough.

The picnic rug was piled high with fodder. We had the usual butties, pizza, and crisps and assorted salads – but I decided to add a few home made treats to the mix. The highlight for me was Rosie Lovell’s divine Pea, Feta and Mint dip. It’s very simple to make, but oh so fresh and lush.

Rosie Lovell’s Pea, Feta and Mint Dip
Cook up a few handfuls of frozen peas/petit pois, drain and cool. Then mix in a pack of feta cheese, some chopped mint and a good glug of olive oil. Put in a blender and bam – you’ve got summer in a pot! You can find out more about Rosie here: http://rosiesdelicafe.blogspot.com/ 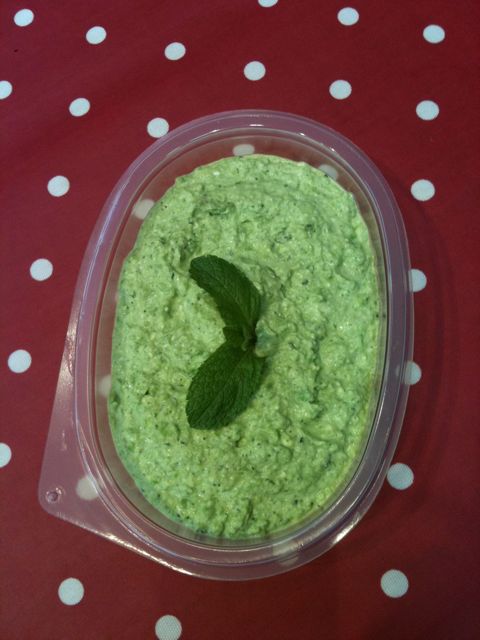 Tana Ramsay’s Family Kitchen cookbook is also a good source of recipes for little people. I whipped up some simple but tasty cheese and ham muffins in my Kitchenaid. They make the house smell amazing when you cook them and are fine to make with a little helper in tow. They taste a bit like lighter versions of cheese scones.

One muffin kept birthday boy Arlo busy for at least 30 minutes – now that’s definitely an ahievement coz he normally chomps his way through food at an alarming rate of knots!

1. Preheat oven to 190 ‘C/375’F/GM5
2. Lightly grease a 12-hole muffin tin (alternatively, use muffin cases in the holes)
3. Sieve the flour, mustard powder and paprika into a large mixing bowl. Rub in the butter until this resembles breadcrumbs. Add the ham and cheese, then stir in the egg and milk.
4. Spoon equal amounts of the mix into the muffin cases and sprinkly a little parmesan on top of each.
5. Bake for 20 mins
6. Remove to a wire cooling rack 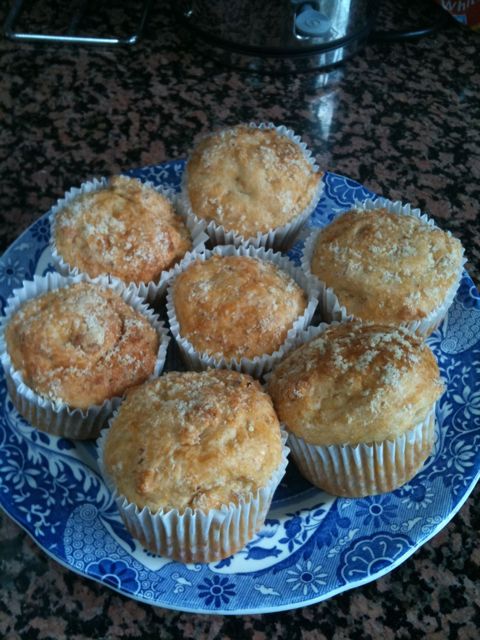 I also made Tana’s sausage rolls – in fact I made them last weekend and froze them in advance. Shockingly organised for me, and I was a little nervous about how they’d taste, but they were really good. I sometimes find you can almost taste the freezer with stuff you’ve defrosted, but I followed Tana’s tip of wrapping each sausage roll in cling film before freezing. Bit of a faff but it worked!

Last up we toasted the birthday boy with some Prosecco and cupcakes. My mum’s killer chocolate fudge cake recipe once again did us proud. Light and fluffy cakes with a modest covering of chocolate fudge icing and a scattering of tiny gold stars.

It was a really relaxed afternoon with lots of chatting, eating and wide open spaces for the kids to run riot. Spot on! 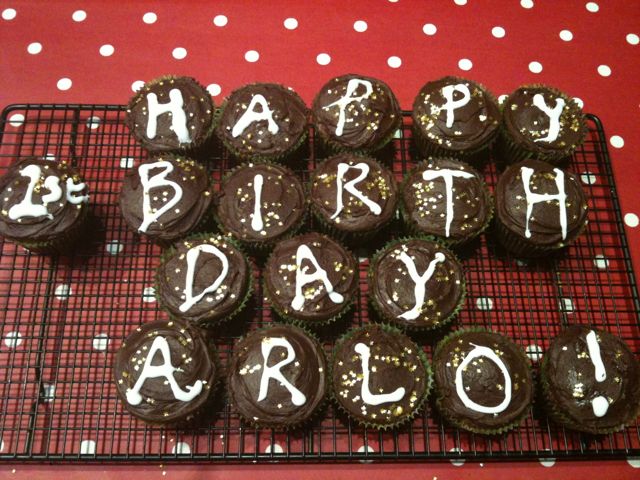 « Lunchtime energy boost
Getting in a stew »